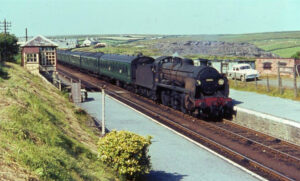 Can you imagine the excitement in Delabole on that lovely, sunny day on October 18th 1893, when the train finally arrived at Delabole Railway Station. The station was bedecked in flags and other hand held decorations were waved as the first train arrived. On the platform to greet the train were: Mark Symons, G.Martyn, J.Martyn, and S.E.Martyn, Wadebridge; Messrs E.J.Heardon and T.B.Burns from Camelford; Messrs James, Nicolls, Rawis & Dr.Tabb, Padstow; Mr Hext,Tredethy; John May, St Teath; Dr Wade, Boscastle; Mr Hayman who photographed the special train.

At 11am the Delabole band marched from Pengelly through Medrose with many men walking along with them. A luncheon for all the dignitaries was served in the room above the Old Co-Op Store, Pengelly and later a sports afternoon for children was held in a field close to the station. In the evening there was a massive firework display.

What a day for Delabole. . .the Railway had arrived. Sadly, politicians decided that railways would not be needed in the future in Cornwall (how wrong they were!) and the closure day came on the 3rd October 1966, 35 years ago.

The North Cornwall Railway Company had planned for the line to run from HaIwill to the bottom of Cornwall but finally terminated at Padstow in 1899. The line was built in sections from Halwill Junction Station traveling through Ashbury Ashwater, Tower Hill, Launceston, Egloskerry, Tresmeer, Otterham, Camelford, Delabole, Port Isaac Road, Wadebridge & finally Padstow. The North Cornwall Railway line was completed over a period of 13 years and the section from Tresmeer to Delabole was due to be opened on the 14th August 1893. However, due to the difficult terrain from Camelford to Delabole it took a further two months to reach our station. The line was built around the perimeter of the Delabole Slate Quarry’s massive hole and this was a sight to delight those traveling on the railway coming into Delabole Station. Unlike most of the other stations, the main buildings were on the down side of the line. The signal box at Delabole remained in use until the stations closure. Freight facilities, (which were making a profit) were closed on 7th September 1964 & passenger facilities were withdrawn on 3rd October 1966. Wadebridge retained freight traffic via Bodmin until 1978.