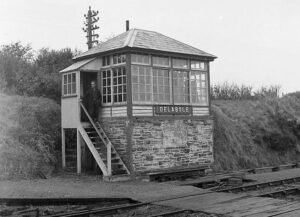 It does seem a long time ago that a down train from Waterloo wended its way from Camelford Station, around the edge of the Delabole Slate Company Quarry and into Delabole Station. In fact it was in October 1st 1966 when the final train ran and it was a sad day for all residents in the area.

North Cornwall Railway Company built the line between Halwill Junction and the stations along the line were Ashwater, Tower Hill, Launceston, Egloskerry, Tresmeer, Otterham, Camelford, Delabole, Port Isaac Road, St Kew Highway, Wadebridge and terminating at Padstow. The line enabled a traveller from Delabole to go all the way to London on the Southern Railway and the terminus in London was Waterloo. With the advent of the car, passenger traffic dropped to an unprofitable level, however goods traffic remained in profit until its closure.

A few years ago I had a long and interesting chat with the late Sid Keat, and he told me many stories of his life as a railway man. He loved the railway and said to me “It should never have closed”, a statement with which I fully agreed. One story he told me was of the time when the guard left it rather late to board the train going to Padstow. In fact he could not get aboard the train and it left Delabole Station with the guard outside the train, hanging grimly on to the carriage door. Sid said he still wondered how he didn’t get crushed on the side of the Railway Bridge as it passed under it. They managed to stop the train and the guard was not injured. He also remembered during World War Two, the occasion when a plane crashed on to the railway line close to the station and the train coming from Camelford had to be stopped before a collision. He knew of one runaway train that was heading for Padstow but luckily it stopped before it caused any damage.

Delabole Station was built at the bottom of Pengelly and this was in a large way due to the generosity of the Delabole Slate Company giving them the land in the Quarry area. In the early days and up to the I 950s, Delabole Slate Company used the line, which had a special branch into their works, to transport much of its production. When the government decided to axe a large part of the rail network, with the aid of the infamous Dr Beeching, the North Cornwall Line was closed. Many Delabole men worked at the station including Sid Keat, Jack Sleep, Les Cory and S.Horrell, no doubt you can name many more.

by A Regal Man